Are Bees Killed For Honey Production?

I was genuinely surprised to find that some folks believe honey bees are automatically killed, the whole colony destroyed, in order to produce honey.

I have no idea where this notion comes from, but it is completely false - at least in the West.

No, Honey Bees Are Not Killed For Honey Production

The very idea that a colony of bees would be destroyed for their honey is a deeply upsetting and stressful one.

Therefore, I hope that the information on this page will reassure those who are worried about bees losing their lives to provide honey for humans to eat.

Why bees are not killed for their honey
It doesn't matter whether honey is produced large scale and commercially, or whether it's harvested by a beekeeper with a single beehive in his back yard, bees will not be killed as a means to get to the honey.

Healthy honey bee colonies naturally thrive year after year, and this is part of their natural life cycle. This means that every year, the colony will produce more honey.

In view of this, the honey bee colony is not something that simply is discarded once the honey is ready.  If you think about it, this wouldn't make sense even to the greediest commercial beekeeper.  Instead, efforts are made to ensure the colony remains in good health, so that honey may be produced year after year.

The only time I am aware that honey bee colonies may be destroyed is when a serious disease infects the colony.  Such a disease (for example, American Foulbrood), would ultimately kill the whole colony anyway.

By destroying the colony, this helps to save other bees from the deadly and highly contagious disease.

Like any activity, profession or industry, there are good and bad apples.

There are wonderful teachers, doctors, dentists and nurses and yet there are those in the same professions who inflict harm on others.

Likewise, beekeepers are ordinary people.  There are beekeepers who care greatly, and those who care less (though I've never heard of a beekeeper who committed jail-worthy deeds as has been the case in some professions!).

It is just as unfair to tar all beekeepers with the same brush as it would be to assume that one bad doctor means that no doctor can ever be trusted. 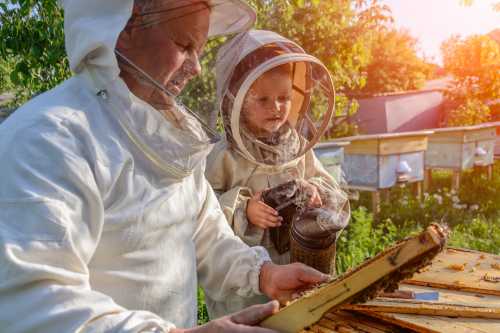 For example, many beekeepers take great care when handling bees.  The use of a brush or feather to gently sweep bees out of danger or harm from injury, is standard practice for the majority.

It is also correct to state that beekeeping practice is evolving and has moved on significantly over the centuries.

For example, in the West, it's hundreds of years since bee colonies were burned to get access to their honey (the burning of colonies continues in some regions of the world).

Nevertheless, in the West, it is true that some beekeepers practice wing clipping of the queen, but certainly not all.  Although this does not kill the queen, my personal view is that even this practice will eventually fizzle out.

Is honey approved for vegans?

As far as I am aware, most vegans don't eat honey.

However, I did once come across a blog written by a vegan who rebelled against this notion (I found out about it, because her blog had a link into my website).

Her justification for eating honey as her chosen sweetener was due to the damaging environmental effects caused by provision of the alternatives.

I suspect it may depend on the region in which a person lives as to whether they have access to fully 'harm free' foods of any kind, and if goods have to be imported, there will be an environmental cost associated with the pollution generated.

At the end of the day, these decisions have to be taken on a personal basis.