Sherlock Holmes And Bees:
Arthur Conan Doyle And The Retirement Of His Famous Detective

If you have read my page about Sherlock Holmes and his connection with bees and beekeeping, you’ll be aware of my enthusiasm for the fictional character created by Arthur Conan Doyle.

It’s always pleasing to learn of others who share a similar interest, and I received a most welcome email from beekeeper and historian, Peter Barrett, and author of “The Immigrant Bees, 1788 to 1898: A Cyclopaedia on the Introduction of European Honeybees Into Australia and New Zealand”.

Other titles by Peter Barrett include; "An Australasian Beekeeping Bibliography.

“Amanda, I delved into Holmes as I was trying to date a story on bees stowing away on a sailing ship from Hokianga, NZ, to Sydney circa 1908-1910. The anecdote mentioned Maeterlinck (1901), the cartoon character Ally Soper, Holmes’ interest in beekeeping, the sailing ship Casablanca.

I kept bees in the Blue Mountains NSW for 15 years, taught myself, have an interesting collection of bee books.”

I’m delighted and grateful that Peter has shared some of his diligent research with me, in particular, newspaper articles published in Australian press dating from 1904 to 1926.

The published items cover Arthur Conan-Doyle’s revival of Sherlock Holmes (following his initial 'death' after a confrontation with Moriarty), and his retirement of Holmes to a life with bees in the South Downs of England.

The items also cover Conan Doyle's tours of Australia, including the author’s visit to an apiary. 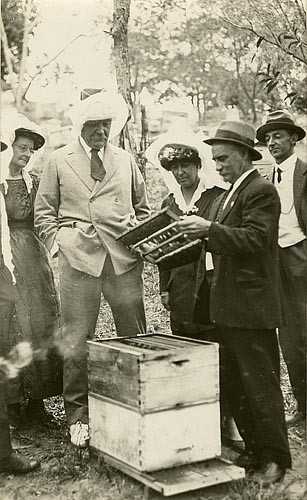 One point that might interest readers is the admission that Conan Doyle himself had no prior knowledge of beekeeping, despite assigning this interest to his famous detective.

Conan Doyle even tells us that Holmes writes a book about beekeeping:  "Practical Handbook Of Bee Culture with Some Observations upon the Segregation of the Queen".

Then again, perhaps we should not be surprised: the ability of an author to convince us is surely a given characteristic of a master story teller with a supreme imagination?  After all, some readers of the tales believed Sherlock Holmes to be a real person, as the author tells us below.

Announcement that Sherlock Holmes is to retire and start keeping bees: 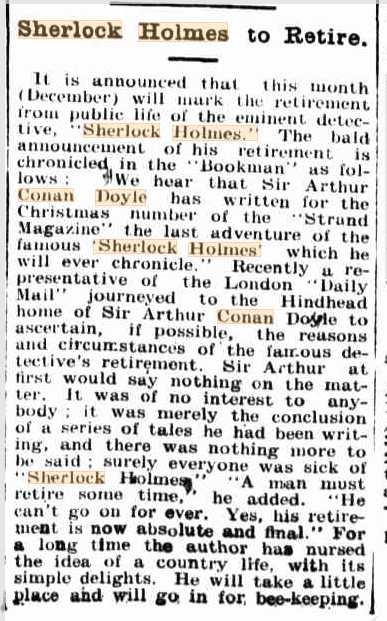 “Recently, a representative of the London “Daily Mail” journeyed to the Hindhead home of Sir Arthur Conan Doyle to ascertain, if possible, the reasons and circumstances of the famous detective’s retirement.  Sir Arthur at first would say nothing on the matter.

It was of no interest to anybody; it was merely the conclusion of a series of tales he had been writing, and there was nothing more to be said; surely everyone was sick of “Sherlock Holmes”, “A man must retire some time,” he added.  “He can’t go on forever.  Yes, his retirement is now absolute and final.”  For a long time the author has nursed the idea of a country life, with its simple delights.  He will take a little place and go in for bee-keeping.” 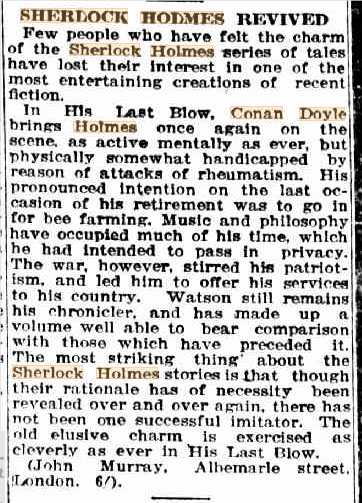 “Few people who have felt the charm of the Sherlock Holmes series of tales have lost their interest in one of the most entertaining creations of recent fiction.

In His Last Bow, Conan Doyle brings Holmes once again on the scene, as active mentally as ever, but physically handicapped  be his reason of attacks of rheutmatism.  His pronounced intention on the last occasion of his retirement was to go in for bee-farming”.

“Sir Conan and Lady Doyle are here being initiated into the mysteries of bee-keeping by Mr. H. L. Jones, of Redbank Plains apiary. Despite the fact that Sir Conan Doyle "retired" his great creation, Sherlock Holmes, to a bee-farm, the famous author had his first insight into bee-farming on Thursday.

It is an amusing coincidence that the nets which the visitors are wearing as protection against the bees closely resemble, in the photograph, the psycho-plastic material in which spirit-faces are framed in Sir Conan Doyle's own slides.” 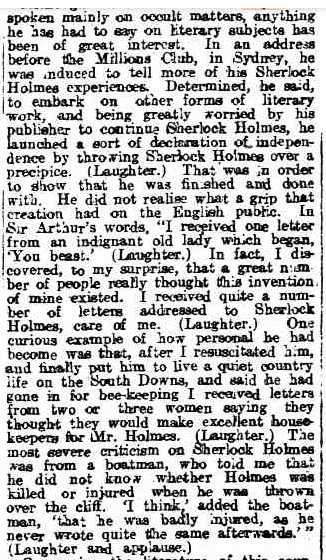 Excerpt:  In an address before the millions in Sydney, Conan Doyle......

“…..was induced to tell more of his Sherlock Holmes experiences. ………He did not realise what a grip that creation had on the English public. In Sir Arthur's words, "I received one letter from an indignant old lady which began, “You beast.' . (Laughter.) In fact, I discovered, to my surprise, that a great number of people really thought this invention of mine existed. I received quite a number of letters addressed to Sherlock Holmes, care of me. (Laughter.)

One curious example of how personal he had become was that, after I resuscitated him, and finally put him to live a quiet country life on the South Downs, and said he had gone in for bee-keeping I received letters from two or three women saying they thought they would make excellent housekeepers for Mr. Holmes”.

Newspaper clip from The World's News (Sydney); Sat 2 Oct 1926; Page 4. Image of Arthur Conan Doyle and his wife at the apiary in Queensland.

“Although Sir A Conan Doyle sent his famous detective, Sherlock Holmes, into retirement on a bee-farm, the author Himself had never seen such a place until he visited Australia, a few years ago.  Here he and Lady Doyle are shown inspecting bee-hives on a Queensland apiary.”

I'm aware that some people have seen the modern day TV series and films of Sherlock Holmes stories, but if you haven't read the original tales, I urge you to do so.  Following the viewing of a film, sometimes a book on which the film was based can at times be disappointing.  However, I have never found this to be the case with Conan Doyle's original tales.

If you would like to purchase books by Peter Barrett,  they are available from Northern Bee Books and other outlets.

Where do bees go in winter?