Honey Bee Declines - Why Should We Be Concerned About Honey Bees?

Are honey bees in danger of extinction?

It is now some years since I first started campaigning for bees, and the debate has moved on significantly.  Yet, there is still some confusion, as to the original alarms that were and are still being raised.  Thus, questions like those above remain common.

Here is a summary of the situation, along with an explanation as to why the debate and campaign evolved in the way that it did.

However, the alarm was raised by beekeepers because of what was happening to so many honey bee colonies that were managed, such as:

Despite the situation above, how are honey bee colonies surviving?

To an extent, losses of managed honey bee colonies can be offset by raising more colonies – although these too could be put into danger, if for example, they are kept on an insecticide treated field or encounter diseases they cannot fight.

In addition, so many people were concerned about what was happening to honey bees, that in some countries, more people took up beekeeping for the first time – prior to this, beekeeping as a hobby had been in freefall.   This has resulted in more beekeepers and more colonies.

However, problems continue in a large part in colonies that are exposed to insecticides.


The problems highlighted above by beekeepers remain very important, because they clearly indicate that something is wrong that needs to be put right.

Merely breeding more honey bees is only a short term sticking plaster approach that does not deal with the underlying causes of the problems.

What about wild bees and pollinators?

Wild bees and pollinators most definitely need our support to reverse declines.

Wild bees have been declining for many years.  Some like to claim it’s partly the faulty of honey bees.  This is nonsense – beekeeping as a hobby had been in freefall for many years, but wild pollinators did not increase in numbers during this period.

Conversely, wild bee populations declined further during that period, and there have been a number of extinctions.

In some cases, disease has also caused concern, for example nosema (which may be linked to neonicotinoids) and disease spread in bumble bees from commercially reared bumble bee species.

The problems experienced by wild bees and pollinators can be traced to human activity.


Human activity can do a tremendous amount to reverse that decline.  Providing food for bees in the form of plants in your garden and not using insecticides, will help wild bees and pollinators tremendously.

If honey bees are not rare, why be concerned about honey bees?

The reason why we should be interested in what is happening for honey bees is because: 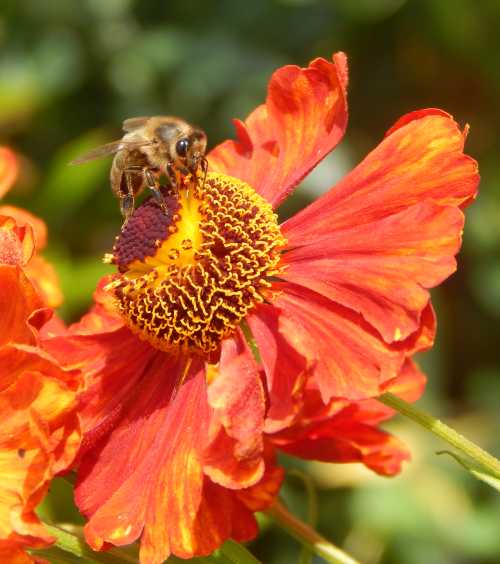 Why do we give so much attention to honey bees?  Shouldn’t we be more worried about wild bees and pollinators?

We should look after both, and be concerned about all of them.  Honey bees are vitally important for the reasons I mention above, and are a beautiful and amazing species, deserving of survival and existence.

Caring about one set of species does not make an enemy of the other.

With increased noise and greater activity, the broader issues facing pollinators generally, are more widely known.  They remain and always have been the same:

Whilst honey bees are not in danger of extinction in the near future, they are vital because environmental factors affecting honey bees are likely to affect wild species, and with more devastating effects.

Honey bees are truly amazing, beautiful and extraordinary creatures.  The continual and dedicated monitoring of honey bee colonies by beekeepers means that environmental dangers to wild pollinators are most likely to be noted and raised by beekeepers first.