Insects are primarily responsible for the pollination of flowers, although some plants can self pollinate, whilst others rely on methods other than insect pollination.

For example, there are water plants that rely on the movement of water in order for pollination to occur – this is known as ‘Hydrophily’ (relatively uncommon, but where water is carried along rivers and streams), and other plants are pollinated by wind.

Other species, not just insects, may also be responsible for the pollination of flowers, such as bats and birds, where pollen can be transferred via fur, feathers, beaks.

The very beautiful short video clip below is taken from a film about pollination, and how pollination feeds us.  It shows us several different species of pollinators....

Below you will find a description of the types of pollination, and links to further information. Clicking on the links within the text opens a new window.

How Does The Pollination Of Flowers Occur?

The pollination of flowers occurs through the transfer of pollen (which is made up of millions of male reproductive cells), from the male part of a plant - the ‘stamen’, - to the female part of the plant, - the 'carpel'.

You can read more on my page about the plant pollination process. It features a labelled illustration, as well as a diagram of a lily flower with labelled reproductive parts.

It’s important to realise that the pollination of flowers is not merely about attractive gardens. Flower pollination aids in the setting of fruits and seeds on a variety of trees and plants, and helps to ensure biodiversity of plant life upon which different species depend, for example, the many bird, insect and mammal species that feed from the same fruits, nuts and seeds.

The relationship between flowers and their perfect pollinators, is often (although not always) a mutually beneficial one, in which the flower is pollinated in exchange for some reward, such as the nectar or pollen – some of which may be consumed by the insect (or larvae) or visiting bird.

I have written a page about the ways in which flowers attract their perfect pollinators – they are said to have developed pollination syndromes - whether it be through the emitting of a beautiful or even foul stench, or the colour of their petals, in order to attract the species of bee, butterfly, bird or beetle that will ultimately help the flower produce seed and fruit.

Some plants have evolved the ability to self pollinate. Self pollination can occur in relatively common species.

One such example is the dandelion, which can be pollinated by insects, or it can do the job itself. This ability is obviously useful to the flower when there are few insect (or animal) pollinators to assist in the process. Some fruits providing food stuff for humans, such as tomatoes, can also self pollinate, although it has been found that the assistance of insects results in a greater quantity of fruits. Self pollination results in less genetic variation among flower species, and can ultimately hamper the health of plants, versus cross pollination.

Characteristics of a wind pollinated flower.

Wind pollination occurs commonly in grasses that provide human food stuffs based on cereals, for example. This accounts for a large proportion of human diet, but arguably, the least interesting part, because it does not include fruits, pulses, nuts such as almonds, and crops used for the feeding of live stock, such as alfalfa.

It’s very easy to forget how many insect pollinated crops also add additional flavourings to other dishes (such as herbs, citrus fruits, soft fruits like strawberries etc), or make up some key staple foods we take for granted, for instance, jams and preserves, tomato based sauces and so on. Some trees are also wind pollinated, such as conifers.

Cross Pollination Of Flowers By Bees And Other Insects

Most flowers are pollinated by a variety of insects, and in fact insect pollination (including bee pollination ) is believed to contribute £134 billion (or 153bn Euros) to the global economy.  In my view, financial contribution is a very narrow way of looking at and appreciating the importance of insects, however.

If we don’t appreciate biodiversity simply for what it is, then I wonder if it’s all too easy to accept man-made, profit-motivated, but ultimately biodiversity and environmentally destructive "solutions" to our man-made problems. Ultimately, this is bound to harm the human race.

Of particular importance to pollination services – whether it be in the garden, countryside or in horticulture or agriculture - are bees. Bees are excellent pollinators for a variety of reasons and are well adapted to pollinate a range of flowers due to the size and shapes of their furry bodies, differing tongue lengths etc. 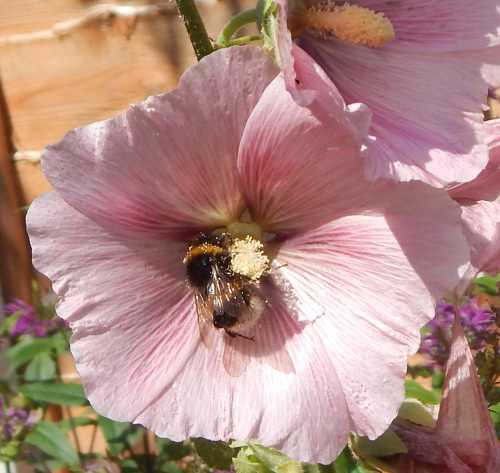 Hairy bodies of bumble bees make them ideal pollinators as pollen sticks to the hairs and is transfered from one flower to another. 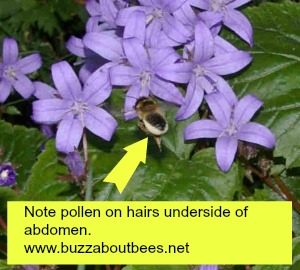 Leafcutter bees carry pollen on their bodies, but they especially gather a lot of it on the underside of their abdomens, where they collect it to take back to their nests.  During this process, many flowers are also pollinated.  Leafcutter bees are incredibly efficient pollinators!

Insects and bees pollinate flowers via a variety of means.  Some bee species buzz pollinate, which releases the pollen from the anthers.

However, pollen in transferred from insects between flowers on legs, abdomen, body hairs.  Wasps, sometimes believed to perform no pollination service, are in fact, important pollinators due to the very fine hairs that are barely visible to the naked eye.  Some plants even depend on wasp pollination.

To read more about the pollination of flowers, go to this main introductory page featuring more links: Plant Pollination Explored.

Bees eat nectar and pollen, but what else do they eat?