The decline of pollinators is of real concern.

One group of pesticides called 'neonicotinoids' is the subject of great debate.

The aim of this page is to share just a small number of studies that have been carried out in this area.

However, please note there are other factors of key concern in pollinator decline. Habitat loss is a major factor, as mentioned elsewhere on this site - see my link at the bottom of this page for further information.

Secondly, the following is in no way a representative sample of the information on this subject - this is just a few I have had the time to mention and write about.  You can also get access to a very small number of papers by visiting my pesticide bibliography.

Missing Bees And Pollinator Declines - A Look At Some Studies

2005: J.M.Bonmatin et al: “Behaviour of Imidacloprid in Fields. Toxicity for Honey Bees”. (Carried out for the French Ministries of Agriculture and Environment).

Very early on in the study, Bonmatin et al refer to the launch of Gaucho® onto the market in 1994 for use on sunflowers. From 1995, beekeepers observed numerous honey bee deaths, and that the problem worsened with the increasing use of Gaucho® on maize. As a result, the product was suspected of having a harmful effect on honey bees in fields. The following graph indicates the decrease in honey production from 1994 onwards. 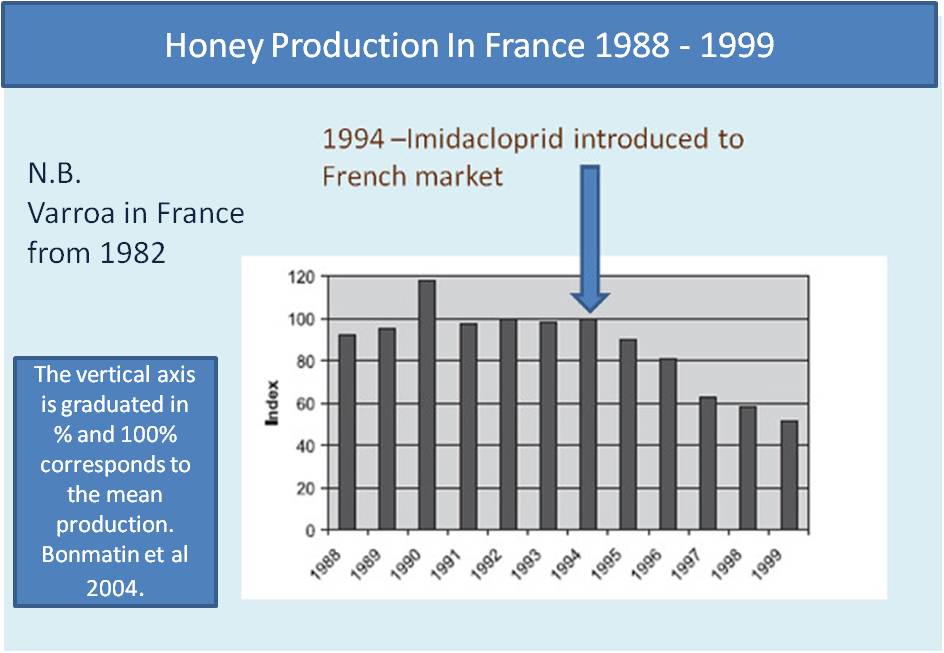 - This study investigates the availability of ‘sub-lethal’ doses of imidacloprid to honey bees. It examines soils, plants and pollens. A sub-lethal dose may cause effects which do not immediately kill, but rather it may impair or harm the functioning and may cause death in the longer term.

- The study referred to research by Suchail et al in 2001, and Belzunces 2001, which revealed that concentrations as tiny as 0.1 to 1 microgram per kilogram cause CHRONIC MORTALITY IN BEES (chronic mortality refers to a condition of slow rather than immediate death).

Soils, plants and pollens, were sampled throughout France and were analysed to follow the fate of imidacloprid in the environment.


Soil Contamination
- French soils from numerous areas with varying climates, soil compositions and rain exposures were sampled - 74 in total, of which 7 came from known organic farms, and contained no imidacloprid. A total of 67 UNKNOWN soil samples were analysed. 91% of them contained imidacloprid, and in 65% of these samples, the quantity of imidacloprid was at more than 1 microgram per kilogram.

- Bonmatin et al found that even where plants had not been treated with imidacloprid, but were cultivated in soil where imidacloprid had been used on seeds one or two years previously, imidacloprid was present in 97% of these soils, with concentrations at 1.2 – 2 microgram per kilogram in 78% of those samples.

- It discussed how levels of imidacloprid could build up in soil after repeated use, so that accummulation effects could not be excluded.

Why is this relevant? – Plant Contamination with Imidacloprid
The study found that residues of imidacloprid were taken up from the soil by sunflowers as they grew.

Even when sunflower seeds had not been treated with imidacloprid, they were observed to pick up the pesticide from the soil, and then became available to bees at an average concentration of 1-2 micrograms per kilogram.

- Bonmatin et al state that a similar phenomenon had been noted in maize, and several weeds and to a lesser extent in wheat, barley and rape (Bonmatin et al 2000).

- Interestingly, the study also makes reference to research by Bayer Cropscience scientists (Placke & Weber 1993), which indicated there were no traces of imidacloprid in sunflowers that were raised from Gaucho® (Imidacloprid) dressed seeds. However, Bonmatin et al make the point that the methods used by Bayer only allowed quantification from 20-50 microgramms per kilogram, whilst neglecting to measure levels lower than this, but that have been found to be toxic to bees.

- The study referred to similar testing techniques being used by Bayer AG (Schmuck et al 2001), where indeed contamination of pollen and nectar had been recorded, but again, they had set their limits of detection at less sensitive levels. 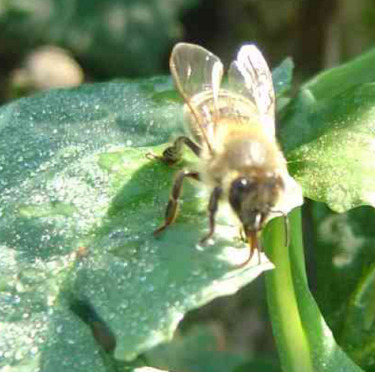 ‘Guttation’ is a process where plants excrete their own xylem fluid from leaf margins and tips. Honey bees are known to drink from leaf guttations, including from plants where they are not foraging for nectar and pollen.

- The study states: “When bees consume guttation drops collected from plants grown from neonicotinoid-coated seeds, they encounter death within a few mintues”.

- Neonicotinoids included within the research: Imidacloprid, Clothianidin, Thiamethoxam, and also a non-neonicotinoid, systemic insecticide that works in a similar way to neonicotinoids; Fipronil.

- The concentrations identified to be secreted in guttation drops, and available to bees in this study were higher than 10 milligrams per litre.

Following this research, Hedwig Riebe of the Deutscher Berufs und Erwerbs Imker Bund e. V. in 2009 (German Beekeepers Association), presented information and photographic evidence from their own little project. The pictures are featured left and below. Note, this was not a scientific, peer-reviewed study.

Hives were placed in an 8 ha canola field in Dueren, Germany, where canola crops and those around them, were treated with the neonicotinoid, clothianidin.

Photographic evidence was taken. The study states that bees were seen collecting from guttation drops, even when puddles were available, although there were also water collectors observed in the field tyre tracks where water formed puddles, up to 40m from the hives.

- Photographic evidence was also recorded showing the resulting honey bee deaths, with images of dead bees outside the front of the hive at 7.30am..... 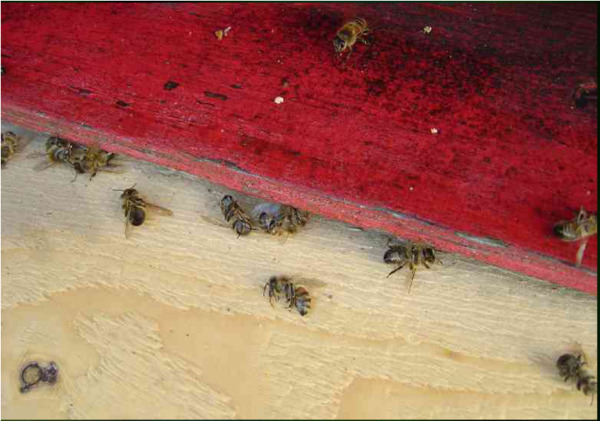 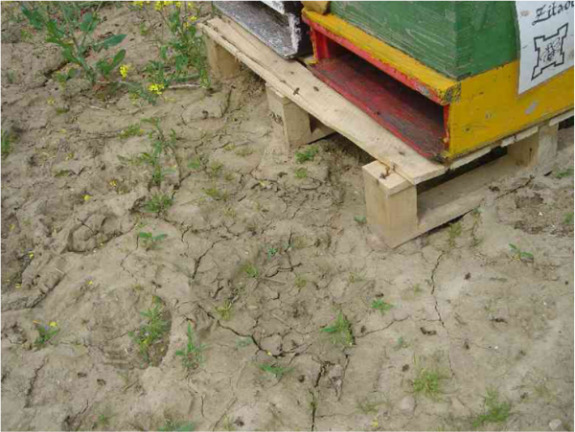 - They tested both Imidacloprid and Fipronil, using dose levels 70 TIMES LOWER than the 50% lethal dose concentration.

- The study found that at sub-lethal doses, the ability of honey bees to forage was severly impaired.

- The study stated that sub-lethal effects induced by systemic insecticides should be considered in risk assessment schemes when considering beneficial insects such as honey bees.

Henk A. Tennekes: The significance of the Druckrey–Küpfmüller equation for risk assessment—The toxicity of neonicotinoid insecticides to arthropods is reinforced by exposure time. Toxicology 2010.

Also: a book published, the website for which can be found here (opens a new window) “A Disaster in the Making”.

Tennekes says the Druckrey-Küpfmüller equation tells us that very low doses or concentrations of some compounds can have devastating effects in the long run. He concludes that even minute quantities can be harmful to insects.

In addition, in a separate presentation, he wrote:

“Neonicotinoids bind irreversibly to critical receptors in the central nervous system of insects and cause irreversible effects.

The damage is cumulative, and with every exposure more receptors are blocked. In fact, there may not be a safe level of exposure.

Neonicotinoids account for worker bees neglecting to provide food for eggs and larvae, and for a breakdown of the bees' navigational abilities. Bees, the number one insect pollinator on the planet, are dying at an alarming rate. Neonicotinoids are prone to leach from soils and contaminate ground and surface water.

Not only are they water soluble and mobile in soil, they are also quite persistent in soil and water. Imidacloprid pollutes Dutch surface water. Ground and surface water contamination with persistent insecticides that cause irreversible damage to non-target insects is an environmental disaster in the making.

The imidacloprid pollution of surface water in Western Dutch provinces with intensive agriculture has already been associated with insect decline and a dramatic decline of common grassland birds.”

– From a presentation by Tennekes.

There are also links to his book available on Lulu on my page featuring a review of Dr Tennekes' book.

This study suggests there may be environmental contamination by imidacloprid of flowers and grass (due to air contamination) near corn fields during seed sowing operations, and in a manner that could cause damage to bee colonies.

Could methods of application of pesticides be an added factor resulting in missing bees - and especially our wild bees?

- Remarks are made about divided opinion on the impact of pesticides on bees, for example, scientists funded by pesticide companies versus opinion of beekeepers and environmentalists.

- The paper states: "It is impossible to ‘demonstrate scientifically’ the direct influence that the pesticide corporations, seed companies, and some farm lobbies, have on research teams that conduct research on honey bees – especially that related to CCD. There are several international and national projects investigating CCD, examples include COLOSS and APENET, respectively. Globally many other projects are beingcarried out, while some of these are sponsored by publicfunding, others are supported by the pesticide corporations.In the latter case, are the scientific results and hypothesis influenced?"

- Maini et al submitted a critical manuscript of a paper by Nguyen et al 2009, to the Journal of Apicultural Research (a publication of the UK-based International Bee Research Association – IBRA).

This paper was a critique of Nguyen et al's assertions that imidacloprid seed-treated maize had no negative impact on honey bees – it failed to take account of a number of prominent research studies that suggest otherwise, whilst drawing on research from industry scientist, notably Maus et al, representing Bayer Cropscience.