When the renowned entomologist, Steven Falk wrote Field Guide to Bees Of Great Britain And Ireland, publishing the work in 2015, he described the appearance, foraging preference, target host and habitat of 34 known Nomada species in the British Isles.

Females of this species are similar to Nomada fucata, but they are larger.  Both species have a yellow sot on the scutellum, which is a section of the thorax (upper body).  In the photograph below providing a side view, this yellow spot is just visible close to the 'waist' of the bee. 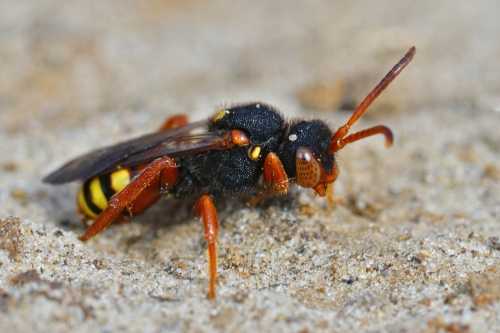 However, Nomada bifasciata females are also notably darker than Nomada fucata, with a conspicuous pile of black hair on the head and thorax.  Males are more similar to Nomada fucata than females.

The antennae of Nomada bifasciata are extensively red or yellow, as opposed to black, with some Nomad bee species.

As a Nomad species and member of the Apidae bee family, this species is grouped within the long-tongued category.

At the time of writing, this species has only been observed in the South East of England around coastal areas and country parks, particularly in Kent.

Nomad bees are cleptoparasites which target one or more host species, often in the Andrena (mining bee) genus.

Upon finding a suitable host nest, the nomad species, enters, lays an egg and then leaves.  The egg develops into a larva which destroys the offspring of the host, and eats the food provisions.

The target host of this species is Andrena gravida, the White-bellied Mining Bee, which is another recent arrival in the British Isles, which has similarly been found in Kent.  It requires spring blossoms for food, and is known to visit trees of the Salix (willow) and Prunus genus (plum), and may be found in commercial orchards where suitable nest habitats are also found.