Although a small number of large carpenter bees (Xylocopa) make their nest in the ground (those from the subgenus Proxylocopa1) most Xylocopa species nest inside soft, hollow reeds and plant stems (such as bamboo) or dying wood2, and usually in tree trunks or timber1.

Most carpenter bees (Xylocopa) make their nests in tree trunks or timber1 but sometimes inside soft, hollow reeds and plant stems (such as bamboo)2.

If you have found entrance holes in the wooden structures of your property, and if you have witnessed large, burly bees entering or leaving them, you may have carpenter bees.

You may be concerned about wood damage.

If this is the case, steps can be taken to remove the bees and protect your property.

In the meantime, you might like to read and view the following photographs from a visitor to this website.  He details how he enjoyed having the carpenter bees nesting in his house for 15 years.

Eventually, there came a time when when he needed to renovate and sell his home.  He details his experience with the bees and his method of removing them, and using insect repellent, which is shared below.

My comment is added at the end of his story.

I once lived in a mostly brick ranch house (Ohio Huber) and had a stack of 1x2" pine boards on my back patio for some reason.

Shortly, I noticed sawdust at the base of the stack and one bee-hole about halfway up.  Since my house was mostly made of bricks, I was not alarmed.

Over a period of more than 15 years, I observed the bees. Usually when I would come out there would be an out-rider, or 'lookout bee' that would observe and interact with me.

Some years in, I decided to get rid of the board stack (at least 60 boards high).  I figured most of them would be riddled with bee-holes but was surprised to find that the bees had only nested in a single board, gouging out a small bit of the board below to gain access.

I removed all but the main board (+10' long) and cut a 4-foot section of the under board containing the gouge to save as a foundation.

Not long after, I came home to find a bee had drilled thorax-deep into my wooden garage door. I stroked its little bee-butt with my finger, causing it to withdraw and fly hastily away. I then sprayed insect repellent on the bee-hole. No bees ever bothered my garage door after that.

Some years later I sadly needed to rehab my house to sell it, and since I was moving to an all-wood house, I could not take my bees with me.

We rehabbed in winter, so the bees were too dormant to flee from my table saw.

A couple of the access holes were in-and-out, meaning that the bee drilled in and then abandoned the hole due to proximal tunnels in the board. There are many instances of bees tunneling through the edge of the board and turning back.

Also, I would dispute your claim that these bees prefer dead/rotted wood. I have only observed them chewing up firm and healthy wood. I do not mean to criticize here, but merely observe.

Also, I do miss my bees.

Inside a carpenter bee nest: Myran's Photographs - published with permission 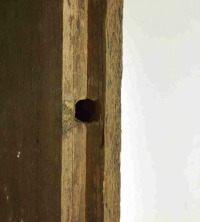 This was the original hole I noticed in the 5 foot stack of 1x2 boards on my back patio. Notice that the hole starts into the side of the lower board, then immediately turns up into the upper board. For about the first 8 to 10 years, this was the only hole.

This shows the extent of the original nest between approximately 1990 and 2009.

This shows another nest in the upper board. 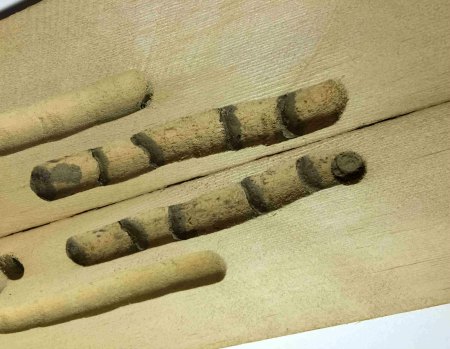 This shows a ‘nursery tunnel’, compartmentalized for the individual bee babies and having the access hole plugged with what appears to be mud. Several of the other tunnels in this board appeared to have been compartmentalized in the past and then had the partitions removed. The partitions also look as though they were made out of mud. 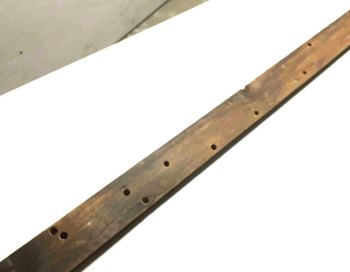 This shows the underside of one end of the board. Ten access holes are visible, with one being plugged up (not the same hole as shown in the picture above) 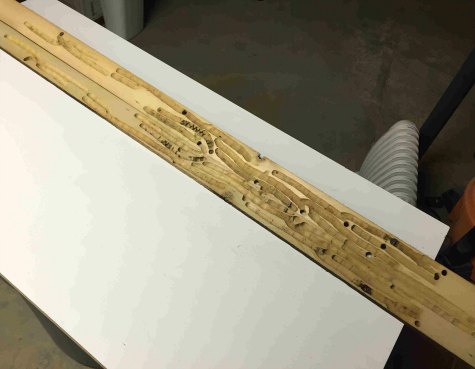 This shows 9 nests accessed by the holes plus one in-and-out hole and one bonus nest whose access hole does not appear in the 05 picture.

I use the term in-and-out to describe a case where a bee dug straight into the board and broke through the surface of the other side, then withdrew and abandoned the hole. There are two in this board, both very close to existing tunnels.

This shows a close-up of the bonus nest in the picture above.

These show a second ‘nursery tunnel’ and a close-up of it.

This shows the lines presumably left after a tunnel had been used as a nursery and then had the compartment barriers removed. These can be seen in the outer two tunnels. 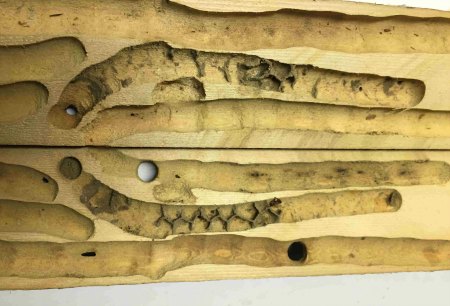 This shows the lines presumably left after a tunnel had been used as a nursery and then had the compartment barriers removed. These can be seen in the outer two tunnels. 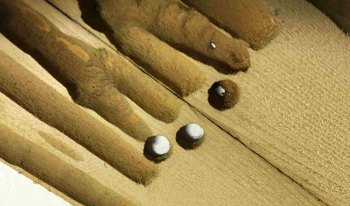 This shows a close-up of the first in-and-out hole (the two holes right next to each other at the edges of the board halves). Note that it barely penetrates the top surface of the board 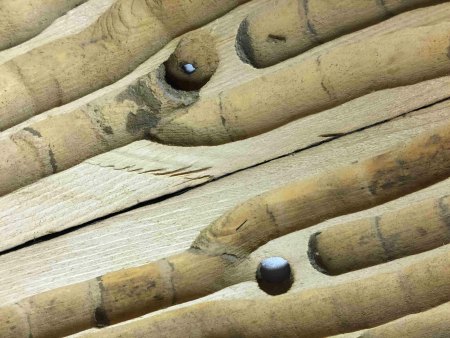 This shows a close-up of the first in-and-out hole (the two holes right next to each other at the edges of the board halves). Note that it barely penetrates the top surface of the board

I liked the fact that Myran lived with the bees for years, and that he felt able to accommodate them for such a long time, until he needed to move house.  It made me smile - and carpenter bees are pollinators after all!

As an alternative to killing the bees, an alternative suggestion might have been to take the chopped out wood into the countryside away from buildings with wooden structures.  This task is best undertaken during winter, because bees will be overwintering inside the tunnels, but be sure to cover the wood during transportation, and uncover it again when you leave it elsewhere.

Myran also describes a situation in which he used insect repellent to deter the bees, and he found this to be effective.  I tend to recommend deet-free repellents (such as Picaridin) rather than poisons to kill the bees.  They are available from Amazon.com.

It's also a good idea to protect wooden structures in the future.  For further information, about how to locate carpenter bee nests and deterrents, please see my page for help with carpenter bees.

2. Wilson & Messinger Carrill; The Bees In Your Backyard, A Guide To North America's Bees, 2016.