The article states that top-supering was used throughout the honey flow.  595 pounds of honey was produced in a season (the beekeeper left 80 pounds of honey for the colony for winter).

Top-supering is the addition of a super on top of existing supers, and is a relatively quick and convenient way of adding supers.

Bottom-supering on the other hand, is the addition of a super below the other honey supers, but above the brood box.  The theory is that bees will get to work on the new super more quickly because it is closer to the brood box, although others are concerned that the queen will enter the super and lay eggs in it, unless a queen excluder is used.

Beekeepers may be persuaded by the article clipping that top-supering could be best, or they may be convinced that bottom-supering would have produced even more honey for this beekeeper.

However, in a study comparing the two methods, neither came out way above the other.

A study, Effects of Top-Versus Bottom-Supering on Honey Yield; published in American Bee Journal in 2000 investigated this topic.  Researchers, Jennifer Berry and Keith Delaplane from the Department of Entomology at the University of Georgia compared honey yield results for top-supered vs bottom-supered colonies, from 3 apiaries (10 colonies per apiary) and two nectar flows typical of north-east Georgia.

This is how they arranged the hives showing positions of the supers: 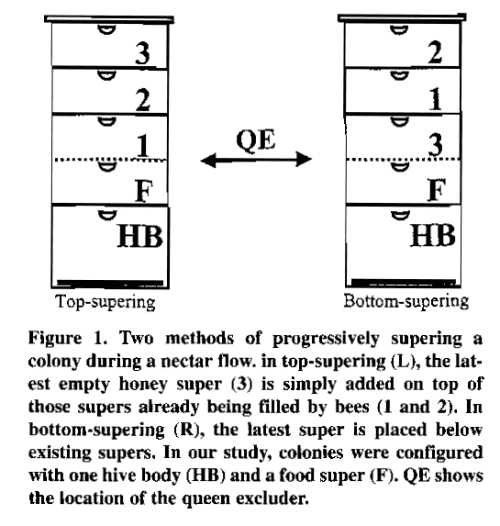 Upon gathering and comparing the results, the researchers concluded that although honey yield was numerically higher when bottom-supering was used, nevertheless, the difference was not statistically significant versus the yield for top-supered honey bee colonies.

You can find more papers by Berry and Delaplane here: