Neonicotinoids In Your Bee Friendly Plants?

Reports from Friends of the Earth have confirmed a concern I have had for some years now:  the issue of contamination of ‘bee friendly plants’ bought from retail outlets, being contaminated with neonicotinoids.  In particular, I’ve had major concerns about Dutch bulbs, due to a Dutch documentary I saw regarding the use of neonicotinoids in their cultivation.

Update:  Please note, this page was written in 2014.  The information may or may not be applicable today.

Two key reports, one from the USA, one from Europe:

Reports from Friends of the Earth 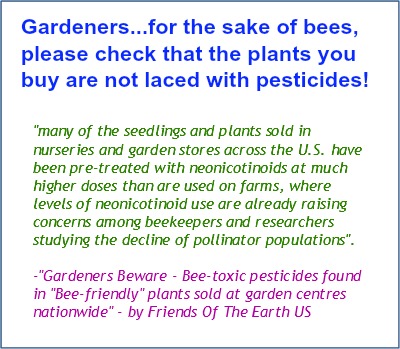 'A Toxic Eden:  Poisons in Your Garden; An analysis of bee-harming pesticides in ornamental plants sold in Europe'.

Samples were taken from 10 European countries:

Pesticides, including neonicotinoids, which have particular properties, such as being systemic and persistent in soil.

Who lobbies the EU most? Agri business. Source: Corporate Europe.

Samples from the UK were not included.

(Copy and paste this link in a new window to see the report: http://sos-bees.org/wp-content/uploads/2014/04/A-Toxic-Eden.pdf).

Key points from the report:

Actions we can take

Here are some suggestions: