I must admit, especially during the early days of campaigning, I tended to lump the terms for ‘insecticide’ and ‘pesticide’ together, but I think it’s important, for the sake of comprehension of this study, to provide a little clarity here:

Pesticide is a term which relates to substances used to control crop 'pests', whether they be invertebrates, ‘weeds’ or plant diseases.

The following field study finds that even when pollen is collected from primarily non-target crops (i.e. the crop selected for treatment by the farmer), the contaminated pollen collected nevertheless exposes honey bees to a level of risk outside of regulatory boundaries.

It also finds that the risk is coming specifically from insecticides – even when the crop (in this case, apples) were not treated that particular season (note that some of these poisons – such as neonicotinoids, are persistent, meaning that they remain in soil some years after initial treatment).

A link to the study is provided at the bottom of this article. 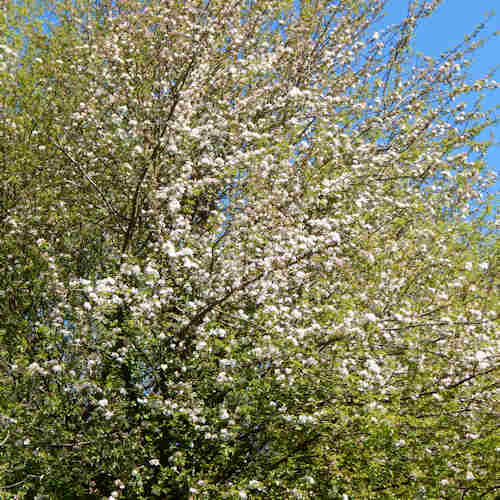 Above: apple blossom is usually an attractive food source for bees

Simple summary of findings and research:

- The landscape surrounding an area of treated crops can strongly affect the pollen gathering habits of bees.

- Despite this, even when bees foraged upon plants and trees not officially treated with pesticides, bees were nevertheless exposed to risk from pesticide residues, and specifically insecticide residues.

- Scientists suggest that the surrounding area can become contaminated by pesticide residues [my note: for example, by run off or leaching of pesticides] from the treated area; or that the small amounts of pollen gathered from treated crops, nevertheless can lead to substantial pesticide exposure.

- The level of risk to bees from the insectides was above the level of concern stipulated by both American and European regulatory bodies.
In particular:

- Within the discussion, the scientists note that some insecticides have high levels of persistence in soil, meaning that residues remain in the soil for a long time following the first application (this means they can be taken up by plants in the future).  They also note that other research highlights that pesticides can interact additively - i.e. when added together, the toxic effects of each or one can be increased substantially.  For example, they note that research demonstrates that fungicides when used on their own, may pose no risk to bees, yet fungicides can increase the toxicity of pyrethroid insecticides to bees by up to 1000-fold,  and the toxicity of neonicotinoid thiamethoxam by 8-fold.  They note that 22 of the orchards used fungicides, and 14 of these used pyrethroids or neonicotinoids (note that also, other insecticides were used at the orchards).  They suggest that if anything, their data underestimates the pesticide risk to bees.

The researchers had set out to answer three related questions:

(1) How does landscape context govern focal crop foraging by honey bees during pollination of apple, a mass-blooming commercial crop?

(2) Is focal crop pollen foraging related to pesticide residues in recently accumulated beebread and/or pesticide risk, as measured by the Pesticide Use Index (PUI) and Pollen Hazard Quotient (PHQ), and

(3) Given different on-farm pest management practices and landscape context surrounding farms, when do these factors lead to substantial pesticide risk to bees?

Pesticide residues in bee-collected pollen can be high despite non-crop sources accounting for the majority of pollen.
The scientists propose that the results suggest:

They also found that risk from chronic oral exposure was above the EFSA level of concern at 22 of 30 orchards. Thus, the scientists concluded that bees at the majority of the orchard sites, experienced pesticide risk exceeding a regulatory agency-determined level of concern for acute or chronic exposure during the apple bloom period.

Compounds sprayed during bloom but omitted from the residue analysis were either:

9 common pesticides were also quantified, despite not being sprayed during the particular bloom period at the 30 sites.

Pesticides that were not sprayed during bloom were found in beebread at 28 of 30 sites, averaging 2.8 novel pesticides per site.

The scientists found that fungicides accounted for 94% of total residues (in ppb) in beebread. However, when they calculated pesticide risk via contact and oral pollen hazard quotients (PHQ), they found that insecticides (more than fungicides) represented the majority of pesticide risk to bees, accounting for 98.4% of contact and 97.7% of oral PHQ.

The study can be viewed by copying and pasting this link into your browser:  https://www.nature.com/articles/srep46554


How do neonicotinoids work to kill insects like bees?

During this process, some bees may die.

Is it okay to kill bees in order to test insecticides?