Nomad bees have a wasp-like appearance, and can easily be mistaken for a solitary wasp species.  However, they are cleptoparasitic bees, and as such, they target the nests of various solitary host species, especially of Andrena (mining) species.

There are many similarities between some of the Nomada species which can make identification quite difficult.  In my experience, they can be easily disturbed when perched on plants and flowers, making them tricky to photograph.  When disturbed they typically fly off with a gliding flight, legs splayed out to the side. 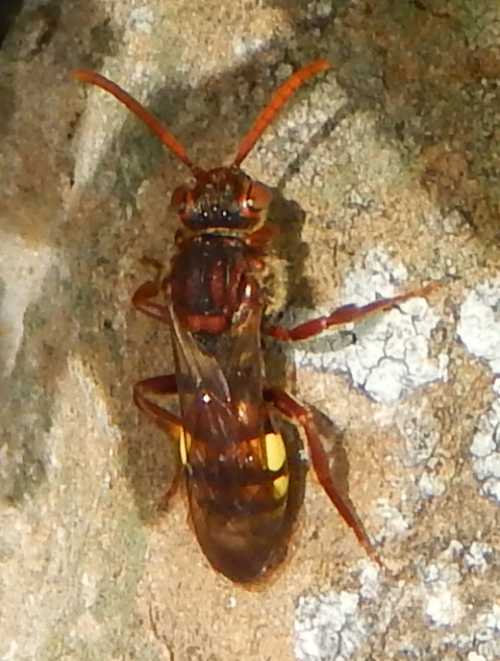 Nomada flava is one of the more common species of nomad bee, and one of the larger species: females measure around 7.5mm - 10mm, and males about the same size.

Antennae, as can be seen from the image above, are orange. The scutum area at the top of the thorax is red striped, and the scutellum at behind the scutum is entirely red.  Note from the top photograph the yellowish hairs on the side of the thorax.

As with other Nomada species, Nomada flava are cleptoparasites.  They typically wait outside the nest of the target host species, enter, and lay their eggs. 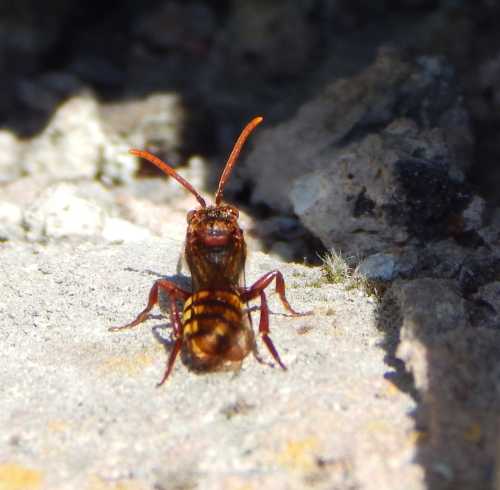 Flavous Nomad Bee - Nomada flava - waits outside the entrance of the nest of a host species.

This species seems quite versatile, and can be noted around wooded and urban areas, also coastal as well as inland.  It may also be seen on farmland.

This one was spotted down a country lane close to where I live.  the local environment consists of a good mix of those described.  Old walls and brickwork are covered in plant growth and there are many hedgerows and gardens.

Opposite the location where this photograph was taken is an old brownfield site located in a a wooded valley.  We are just a few miles from the coast.

They can be seen from March through to June.  Should you spot this species it may provide a useful indication of the presence in the area of the target host species, and possibly the nest sites of the host.

Nomada flava is a cleptoparasite, and targets the chocolate mining bee, Andrena scotica. 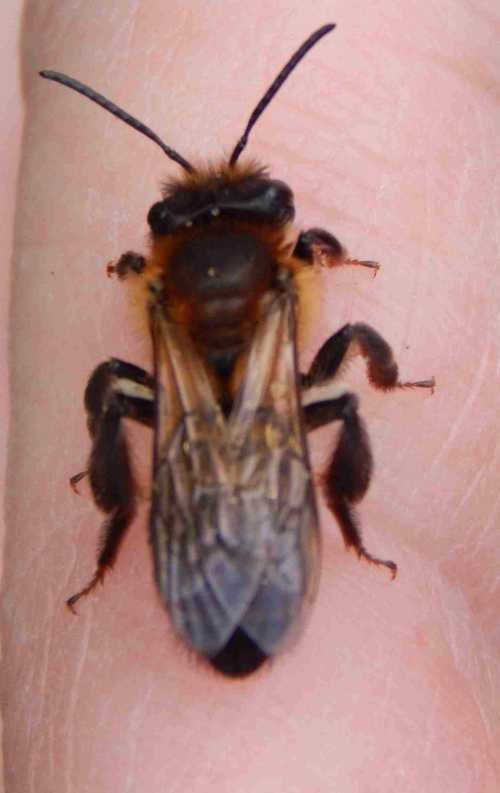 The flavous nomad bee Nomada flava is a cleptoparasite of the chocolate mining bee (above), among other Andrena bee species.